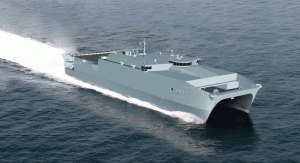 Seacoat Technology LLC said it has been awarded the contract to supply the underwater hull coating system for the JHSV (Joint High Speed Vessel).

Seacoat, based in Houston, said its SEA-SPEED V5 hard-film siloxane foul-release coating technology was chosen for the JHSV based on the coating’s superior durability, reduced weight, and foul-release properties.

JHSV is a joint-use platform to be operated by the U.S. Army and Navy for transporting troops and equipment and supporting humanitarian relief efforts, with operation at high speeds in excess of 35 knots.

Seacoat Technology is a manufacturer of high-performance silicone foul-release coatings for use on container ships, tankers, cruise ships, yachts, and smaller vessels.

Austal USA was awarded the contract to build the first three JHSVs as part of a 10-vessel program valued at up to $2 billion.

Austal said construction of JHSV 1 “Spearhead” is currently under way at Austal’s U.S. facility in Mobile, Ala. Construction of JHSV 2 is scheduled to begin in September, with building of JHSV 3 to begin in mid-2011. The company says the JHSV is similar to the Austal-built WestPac Express operated by the U.S. Marines for the past eight years.